Dwight and Beckie Johnson retired from teaching at Morrison Academy in Taiwan in June of 2019. Dwight is now serving as a Volunteer Mobilizer at Corban University in Oregon for WorldVenture. 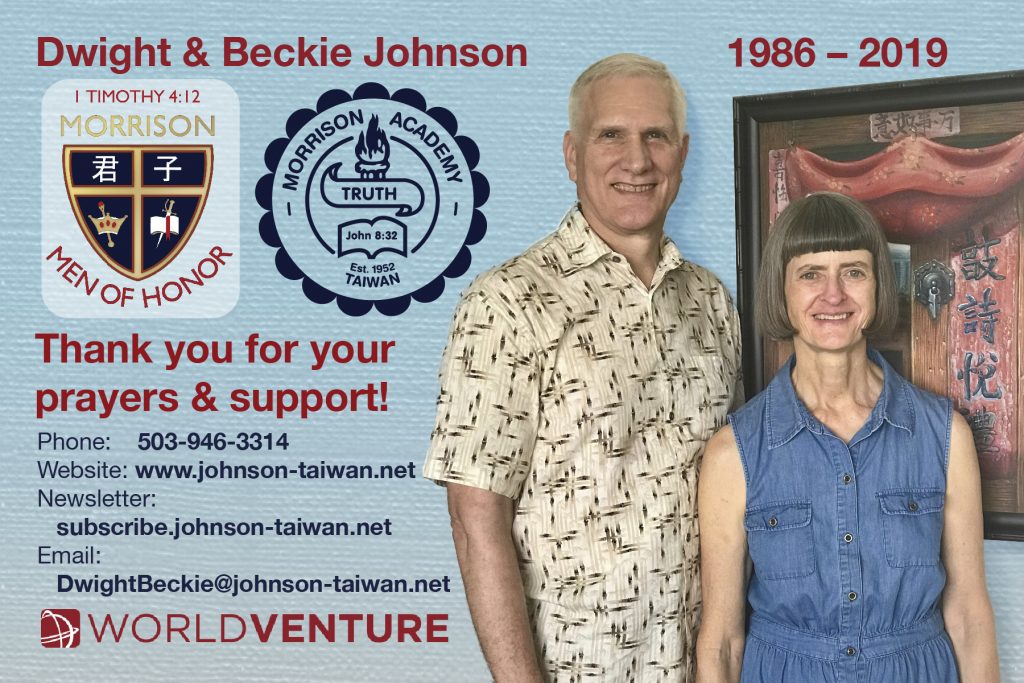 In 1986, the Johnsons began serving at Morrison Academy in Taiwan.

The Morrison Academy community includes families from about 30 different countries and serves students from both missionary and business families.

How are we to teach the next generation what it means to be and act as a Christian in this changing world? The need to challenge and engage missionary kids to think through how they will live in this technological age is one of the things that brought Dwight and Beckie to serve at Morrison Academy.

A highlight for Dwight was creating and then teaching a high school Bible class for junior and senior guys called Men of Honor. Over the years at Morrison, Dwight got to teach Bible, computer programming, web design, math, science, and video production. His main responsibility over the years was was to support students and teachers with their technology needs. He enjoyed presenting to a variety of classes on technology and culture. The Women of Worth and the Relationships Bible classes both enjoy Dwight’s presentation on how men and women tend to relate differently and why. Dwight also organized and led a father/son weekly breakfast that lasted for several years.

Beckie cared for the needs of their family until they left for college. Their four older children are grown, married, and living in the U.S. Malia, their youngest is attending a University in Taiwan and plans to graduate in June of 2021. Beckie also served as a part-time school nurse and was often called upon to advise people in the community about their medical needs. One of her favorite ministries was serving young moms by helping with childcare, being a good listener, and occasionally giving the perspective of experience. She also demonstrated hospitality by regularly having people as dinner guests including a weekly dinner for singles in the community.

Both Dwight and Beckie made a commitment to missions before leaving college. During Dwight’s early teaching years at Hillsboro High School in Oregon, he and Beckie worked together in the youth ministry at Village Baptist Church. They had so much fun working together they formed a lifetime team by marrying in 1980. In 1986, they headed to Morrison Academy for a two-year assignment and later returned in 1993 as full-time WorldVenture missionaries.

You are right. You have an advantage — The greater the struggle, the more glorious the triumph.